New signage welcomes all to Taranaki Base Hospital

Permanent signage is going up in the Project Maunga areas including rooms, wards, lobby, corridors and the main road-front entrances to the hospital.

Taranaki DHB Chief Executive Tony Foulkes said he was delighted with the new signage that was easy to follow and welcoming for all. “We included bi-lingual signage for Project Maunga in partnership with Te Whare Punanga Korero Trust.”

“There has been much discussion between the DHB, Te Whare Punanga Korero and Te Reo o Taranaki Trust which has provided translations and art concepts that reflect the tikanga / customs and traditions of Taranaki,” he said.

“The result is something we can all be proud of, a strong visual representation of the inclusion of kaupapa Maori into the hospital environment to make it more welcoming for whanau and for everyone coming to the hospital.”

Mitchell Ritai from Te Reo o Taranaki said the use of Taranaki dialect is important as a mechanism of self empowerment for communities. “We have tried to do this while adhering to the guiding principles of simple way finding and easy to understand signage.”

“The opportunity of increasing community awareness of the Taranaki dialect through hospital bilingual signage directly aligns with the Trusts aspirations,” he said.

In addition to the signage, ‘Te Kurarau’ is a motif developed by local artists BJ Hetet, Glenn Skipper and Rumatiki Timu, for the Taranaki DHB.  Te Kurarau promotes the unity and sacredness of the Taranaki health community.  Literally translated as “the many treasures” it:

Te Kurarau and the karanga together, reflect the cultural theme that will carry through all the Taranaki DHB facilities.

The signs have a statement of welcome at the top which reads
“Piki tu, piki kaha, piki ora, ko Pipiko tenei”.

“Piki” means to ascend, and in this context means “Piki tu” to arise and be upstanding, “piki kaha” arise and be strong, “piki ora” arise and be well, “Ko Pipiko tenei” at this place called Pipiko, the name given to the new hospital by respected Taranaki kaumatua Huirangi Waikerepuru at the time of its blessing in August last year.

The statement is done in the form of a “karanga”, or a chant of welcome similar to the chants performed by women as they call visitors onto the Marae.  While its purpose is to ensure all visitors are made welcome, the phrase reaffirms the name given to this locality during the blessing; the name ‘Pipiko’ portrays the celebration of life.

“As well as this, we have included ‘Taranaki like no other’ in the signs to reflect that the facility and services are for the whole province,” said Mr Foulkes.

“The idea of encompassing this in our external signage is to focus and celebrate our local pride, and recognise Taranaki as a great place to live, work, learn and play,” he said. 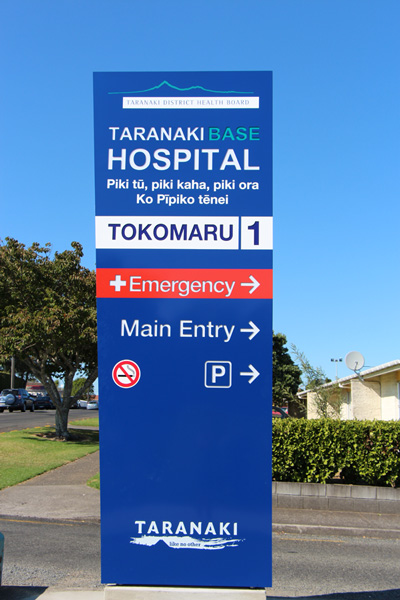